What are the Best Platforms for Video Games?

Since the advent of video games, the industry is constantly growing – both in terms of appearance, the technology with which they are created, and how they are played. In recent years, the variety of gaming platforms has grown significantly and has offered players different experiences, closer and closer to reality. Today’s video games offer photorealistic graphics and simulate reality to a degree which is astonishing in many cases. Depending on the players’ experience, they can use gaming platforms both on the go, such as Google Stadia, and static ones such as PC or Xbox.

In the video game industry, the competition is fierce, so many companies are struggling to differentiate themselves from competitors. For a video gaming platform to be successful, it is crucial to be backed by the developing community. Depending on the platform, video games’ main categories can also be categorized into computer or console games. Still, industry and technology have evolved so much that many new subcategories of these platforms have emerged.

According to Statista, the PC remains the frontrunner concerning developer support. 66% of the roughly 4,000 developers surveyed are currently working on a game released on PCs. Moreover, 60% of the respondents think PCs one of the most exciting gaming platforms. In second place of favorites is PlayStation 4, a top priority for developers. 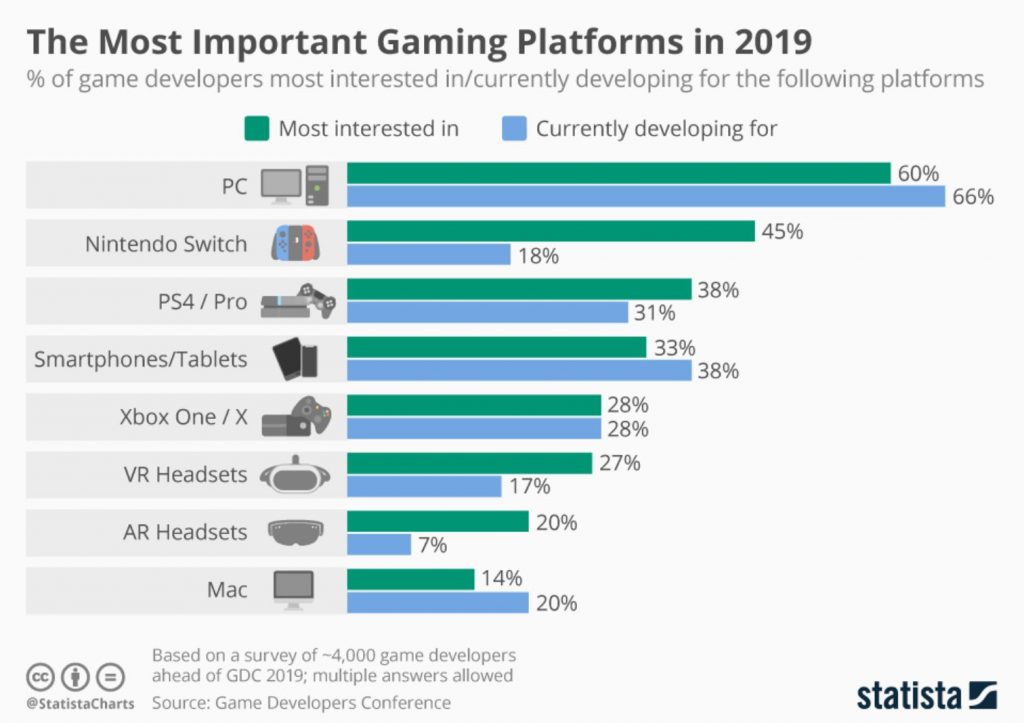 What are video game platforms?

A gaming platform is an environment in which a piece of software is executed. It can be a type of operating system (OS) or the hardware, even a web browser, and associated application programming interfaces, or other underlying software, as long as the program code is executed with it. Each gaming platform offers different restrictions and functionalities, so they can be seen as a constraint in developing video games.

At the beginning of gaming platforms’ development, video games were developed for two main platforms: consoles and personal computers (PC). But recently, the growth of technology and industry has led to the development of mobile video games for smartphones and tablets, virtual and augmented reality (VR and AR) systems, and remote cloud gaming. Currently, there are five main platforms in the video gaming space:

Two of the recent console releases have been from Sony and Microsoft, which have released the PlayStation 5 and Xbox Series X, two powerful consoles that will be in the spotlight for the next few years. Before buying a new console, most people wait until the new consoles offer a wide range of games, a drop in prices, or a second edition or refresh (like the PS4 Slim or Xbox One S, which were released later in each platform’s lifecycle).

The most known gaming platforms

There are currently many gaming platform options for players to choose from. Whether they play a game on a PC, console, handheld device, people have an eclectic mix of games, accessories, features, and exclusive software to choose from.

PCs have been considered to be one of the strongest gaming platforms in the video game industry. The PC game developers have the opportunity to exercise their creativity through the wide range of games that can be created for this gaming platform. PC games include action shooters, multiplayer, strategy games, and many more based on a specific game genre.

Gamers prefer PCs because they are easy to update, offer high-quality images, and have far more power in handling blockbuster games and streaming channels. There are also some games like World of Warcraft and League of Legends, which are also only available on PCs.

Nintendo has a rich history when it comes to gaming machines, but of all, the most popular console is the Nintendo Switch. It broke down the barriers between the home console and portable games, giving players the ability to play video games anywhere. As with PCs, there are exclusive games for the Nintendo Switch, such as Zelda, Super Mario Bros., Splatoon, and more. Other popular Nintendo games such as Pokémon Sword and Shield, and Animal Crossing: New Horizons have sold over 20 million units each. 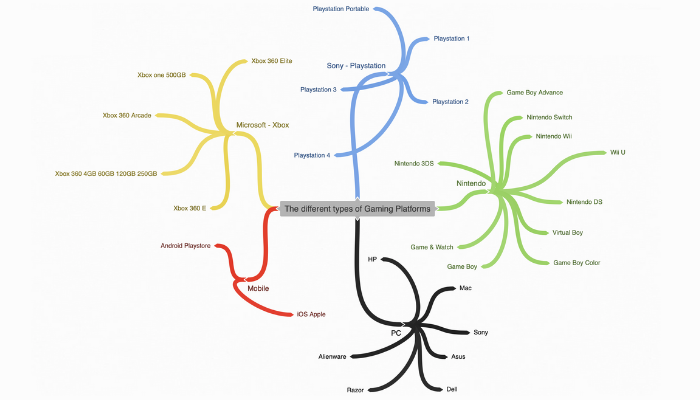 Although many companies competed for first place in the top of the best-selling gaming platforms, the PlayStation took this place of honor, according to Guinness World Records. This title is mainly due to the PlayStation 2, which sold about 159 million units until 2019.

PlayStation is so popular because the company has pushed the technology innovation countless times and, of course, Sony’s commitment to gamer satisfaction.

While Nintendo and Xbox One may attract some players by design, many people agree that the PlayStation has always been sleeker, with an elegant look, and gives a nice feel to the one holding it in your hand. Also, with over 800 video games in its library, PlayStation is the ultimate subscription-based game service.

Microsoft launched the Xbox gaming platforms in 2001 when it competed directly with PlayStation 2 and Nintendo’s GameCube. One of the most popular Xbox consoles is the Xbox One, which is considered more powerful than the PS4. Xbox One offers native 4K visuals and an overall performance boost on all Xbox One software, even for games that have not been optimized for it.

Much of Xbox’s success is due to the Xbox Live online service, which for an annual fee of $ 60 offers online access to players and includes the Games with Gold rewards program. Xbox also provided users with a better and simplified experience, so in 2015 it brought several major dashboard updates.

Microsoft created a successful program that consisted of backward compatibility of games, making games from the Xbox 360 and even the original Xbox backward compatible on the Xbox One. Some of these games are even Xbox One X Enhanced, with higher resolutions and better framerates than the game’s original version. Among the most popular games for Xbox are Hitman 3, Call of Duty: Modern Warfare, Fortnite, PlayerUnknown’s Battlegrounds, Assassin’s Creed: Valhalla.

And for streaming? What platforms are the most famous?

Twitch is the most popular, easy to use, and efficient of all the streaming game platforms. The majority of Twitch users are gamers who host and share eSports events and challenges on the platform. They can show their skills, connect with their audiences, build tight-knit communities, and make money doing what they love to do. As a streamer grows on the platform, they can unlock many rewards and monetizing options. They can also progress from a Streamer to Affiliate to Partner. Users can use the official website or the Twitch app to access Twitch, available on iOS, Android, Mac, and console game stations like PS4 and Xbox One. 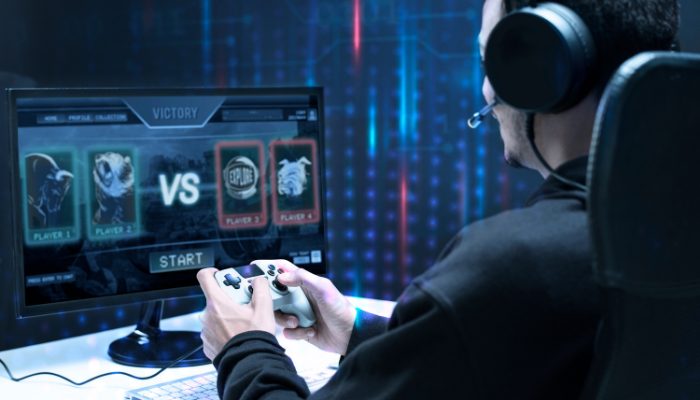 YouTube Gaming is an offshoot of YouTube that features both live and on-demand video game content. This platform organizes videos about video games so that players can find them faster and not be confused by out-of-topic videos. Unlike Twitch, where users watched in Q4 2019, 2.3 billion hours of content, YouTube Gaming only brought in 0.9 billion hours of watched content, but the platform is constantly growing. In 2020, for example, Youtube Gaming agreed with Activision Blizzard to become an exclusive partner for the Call of Duty and Overwatch leagues.

Unlike Twitch and YouTube Gaming, Facebook Gaming has some additional benefits for Android users. Facebook Gaming also allows regular users to start live streams and showcase their gameplay. Also, the platform enables users to join groups centered around particular games and even create their own groups, start interesting discussions with other members and play mini-games together.

Every gaming platform has its advantages and fans; that’s why at Starloop Studios, we have a large expert base of state-of-the-art and relevant technologies to create video games for PCs, consoles, and mobiles, but also for VR. / AR and overthose, porting games from one platform to others!

Contact us to schedule a free consultation with one of our Starloopians and find out how we can help you.