How to Create Good 3D Video Games with Unity Software?

Since its launch in 2005, Unity has been one of the most popular game development engines. At first, it was created only to develop video games for Mac OS, but as new versions appeared, Unity added 24 more platforms – such as PlayStation 4, Microsoft, Xbox One, or Nintendo Switch.

Although first designed to create only 3D games, at this moment, game developers can create 3D and 2D games with Unity. One of the significant advantages it offers is that it’s free to use for individual game developers and studios with a maximum income of $ 100K.

What is it like to create a video game with Unity software?

Unity is known for being the go-to development environment for indie and mobile games. According to the company, as of September 2019, 52% of the top 1,000 mobile games were powered by Unity and 60% of all AR / VR content. With Unity, game developers can create games for 25 platforms, and the fact that it has been installed more than 3 billion times in just the last 12 months shows its popularity. Also, the real-time development platform allows for the creation of 2D, 3D, VR, and AR video games.

Unity is one of the favorite choices of game developers because it is fast, without even coding, or with very simple coding ( eternal battle Unity VS Unreal ). The primary programming language for Unity Engine is C #, which is a powerful language and easy to learn for new game developers. They can also use Unity for HTML5 games – Unity’s WebGL build allows the game developers to render 2D and 3D graphics in a web browser without the need for additional tools or plug-ins. The software’s fast is not limited only to the creation of video games but also to their portability. With a single click, Unity makes your video game ready to go on all the different platforms. That is a precious feature, given that Unity is available for 25 different platforms.

Due to the large and varied asset store that Unity offers, the engine is one of the first engines options that game developers choose. That claim is supported by figures, which show that around 1.5 million developers visit the Asset Store each month to browse the 56,000 packages available. At the same time, Unity allows game developers to build their own tools, simplifying the whole process. Keeping up with the latest technology, it becomes popular for indies and small teams, including game developers who create VR games. Lately, Unity has been praised for its VR skills.

Monster Chefs- One of Our Recent Successful Unity Game Projects

What are the challenges of using Unity for video game development?If the project is more extensive or game developers want to create something more personalized, they may encounter challenges and inflexibility working with Unity. Also, Unity is not as friendly with game artists as Unreal Engine, which has more options for shadows, lighting, etc. Game artists may find it more difficult to find specific UI features, this being the area where Unity could improve things.

Unlike 2D games that are flat on the screen, 3D games have volume and depth. This primary difference leads to other influences like movement, environment, controls, and gameplay goals. As a result, 3D games offer a more realistic feeling, higher-quality graphics, and versatility for game developers, who have more options and genres to create 3D games.

For these reasons, 3D games are more attractive to players and create more engagement. Initially, Unity was created only to create 3D games after adding the option to create 2D games. For beginners who want to develop 3D games, Unity also offers a series of free tutorials.

Is Unity a good option for developing 3D video games?

In short, the answer is Yes! But let’s explain why. Unity engine provides everything a team of game developers needs to create a 3D game and provides many tools and benefits to make their work easier. Regardless of the video game stage, with Unity’s solutions, game developers can complete the project from concept to launch and beyond, including the maintenance period of the game. As we specified a little above, Unity comes with a combination of multiple assets, and these are – fully integrated environment, ready-to-use assets, intuitive processes and tools, a helpful community, and free video tutorials. Also, graphics rendering is particularly interesting as many platforms (PC, console, VR, etc.) have their system setting, but Unity allows for rendering from other engines such as OpenGL, Direct 3D, Adobe, and many more. 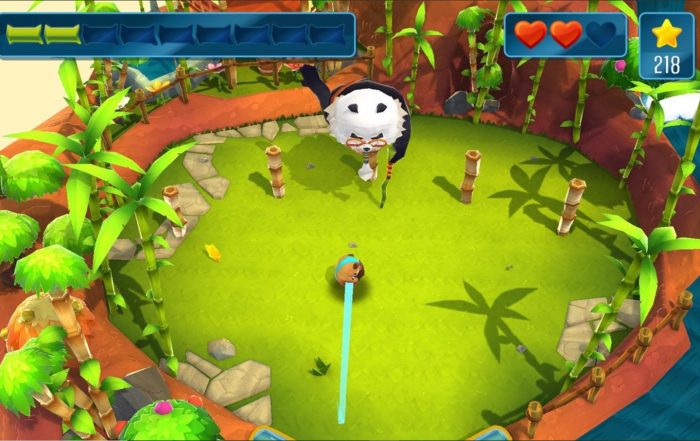 Momonga- One of Our Recent Successful Unity Game Projects

Unity is an easy-to-learn and master engine, so anyone who wants to build a 3D game has access to many online resources and materials to complete their project.

Due to the multitude of features, it offers, more and more 3D video games are being created with Unity. According to statistics, the top 34% of free mobile games available on the Play Store and App Store are made by Unity. Unity dominates 45% of the games engines market.

How do we use Unity in Starloop Studios?

At Starloop Studios, our top certified Unity game developers provide immersive 3D experiences with Unity and cutting-edge gaming solutions and real-time consultation. So whether you want to create a video game from scratch or need a helping hand to speed up the launch of your gaming app, our Starloopians can turn your idea into an engaging 3D game.

Our game development team are specialists in Unity’s language program and have invaluable experience in creating projects using them.

Contact us and find out how we can offer you impeccable Unity 3D development solutions that are unbeatable in terms of functionality, design, and performance.