Mobile Video Ads and their Benefits

A role in the game industry’s growth is played by the advertisements that publishers have included in their growth strategy. Because the mobile games market competition is high, mobile ads have become one of the most effective tools to stand out in front of all competitors. Also, the development of smartphone technology that has led to the transition from the mobile web to apps has significantly changed the way advertisers perform ad delivery. The companies have introduced new formats of mobile video ads that are in line with the new user behavior.

What are mobile video ads?

Mobile video ads are a popular and effective app monetization strategy that publishers use to promote their games and increase revenues. Mobile video ads are very effective in ensuring better engagement. According to a study by the Interactive Advertising Bureau, it was found that mobile video ads have twice the click-through rate and three times better than classic banners and interstitial ads. Also, the video viewing rate is constantly increasing worldwide. This is the type of content most preferred by users.

To be as effective as possible, mobile video ads tend to be shorter due to the Social Media platforms where they are promoted. Some studies have shown that 88% of the 30-second video is watched in its entirety. The excellent part about mobile video ads is that they are easy to distribute. If they are well made and captivating, people tend to share them with friends, especially on Social Media channels.

The mobile video ad game aims to attract attention and get as many users as possible to download the game app. An effectively made video must convey to the player the desire to play the game. The purpose of a mobile video ad is to maximize installations. If the acquisition of users is at an affordable CPI, it means the mobile ads are efficient and well done.

Depending on the marketing strategy that game developers approach, they can create mobile video ads that focus on explaining the game, how it is played, and its features and benefits. It can be a short and interactive video game tutorial. Also, some video ads focused only on promoting the game’s features and did not necessarily show the game itself.

A very effective way to promote your gaming app is on Social Media channels – especially on Facebook, where the methods of targeting the audience are very well defined. On Social Media, it’s good to keep your mobile video ads short. Thus, people will tend to watch the whole video. It is recommended to capture attention quickly through a very captivating video start so that the first 3 seconds of the video must be the most convincing. Also, being video ads that are displayed on the mobile phone, it is good that they have a vertical or square format to cover as much of the screen as possible.

What formats of mobile advertising are there?

Before launching the campaign to promote your game app, you need to know the types of ads for mobile, how each works and how to select the right one. The most common mobile advertising formats are: 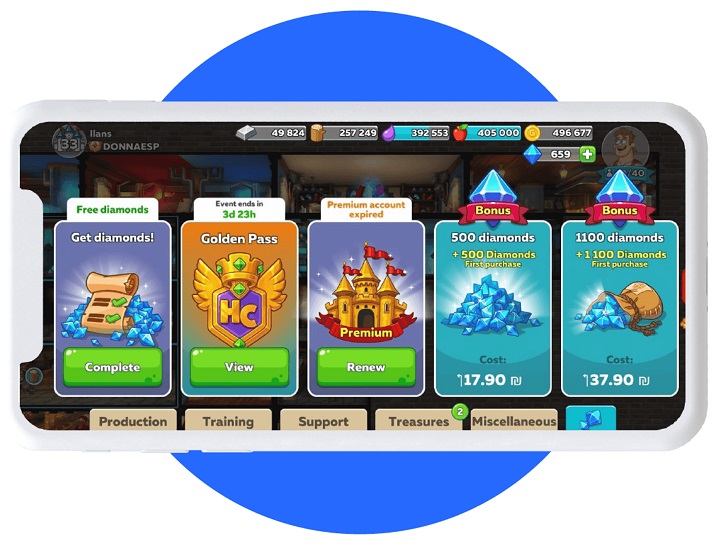 Unlike other ads, mobile videos attract users’ attention significantly better and deliver your brand message effectively. Through interactive mobile video ads, Starloop Studios as game development company, can help you increase the number of installations and maximize the engagement for your gaming app. With over ten years of experience in the video game industry, we can create for you engaging mobile video ads that generate higher conversion rates while overhead remains reasonable.

If you want to start increasing the numbers of your game users today, feel free to contact us and schedule a free consultation with one of our Starloopians. Here are some of our recent successful projects.