Trends and Opportunities According to Pocket Gamer Connects London 2019

Jesús Bosch is the Founder and CEO at Starloop Studios. With an entrepreneurial spirit, and hybrid business and technical background, he values the most working with honest and smart people and build personal relations to achieve more together. He defines the company strategy and manages a team of great people trying to balance the challenges with the day to day operations to help the organization reach new horizons.

A few weeks ago, my partner Alex Rodriguez and I had the opportunity to go to the Pocket Gamer Connects in London to represent Starloop Studios, meet with partners, customers, and also with a very important goal that is to understand market trends and new opportunities that may exist.

In this post, I will talk about the main takeaways that I have detected after attending a large number of conferences (28 to be exact). The truth is that there were many conferences of about 20 minutes in parallel of very varied topics, and I chose the ones that seemed most interesting to me.

Culture of work in the company

Building a positive culture and feed it is making employees flourish and making it easier for each of them to give their best, resulting in their happiness and better productivity of the company at a general level. And this is very important.

I really liked Cristina Carmona’s talk. She spoke of the importance of establishing clear and strong values in the company, which allow the staff to identify with them. And his observations about the influence that management can have on the company’s culture, for better or for worse, was also very interesting.

She also explained that it is very important that all team members have clear objectives that allow them to pursue excellence and grow. The application is not easy… because measuring productivity in certain areas can be complicated, and I have seen quite large companies be unable to fully solve this problem. It seems to me a very important but necessary challenge. 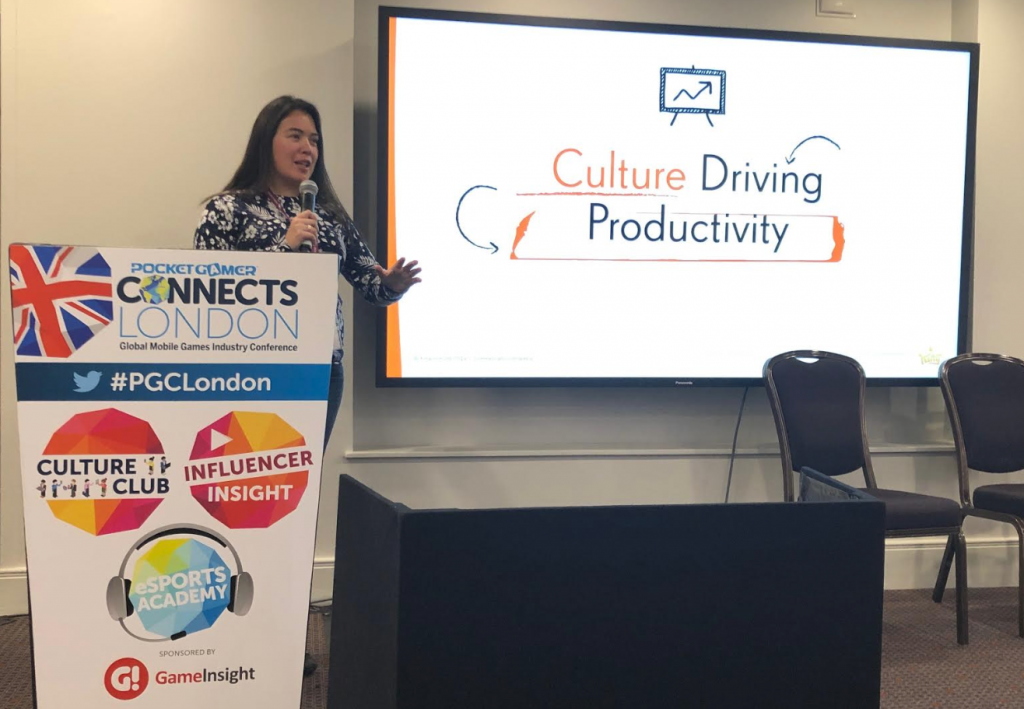 Jeff Hickman of NaturalMotion also gave an interesting talk in this area. And my main takeaway is that you as a company, must involve the whole team as much as possible, you have to decide who you want to be. It seems obvious, but many times we get carried away by the current situations and sometimes not planned enough. 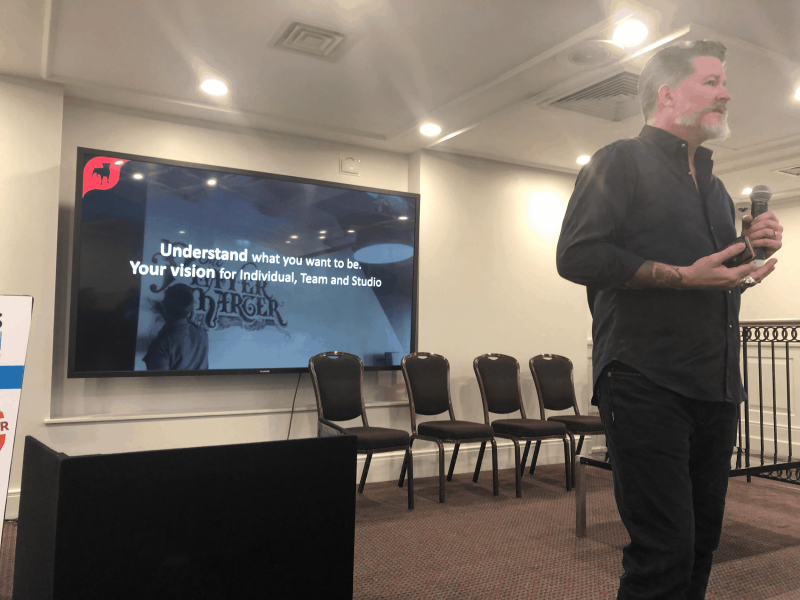 Games for adults, a profitable segment of gaming that for many, goes unnoticed

Jean-Francois Tremblay of Nutaku argues (with some reason) that less than 1% of the apps at Google Play or App Store are profitable. Under this principle, for him, the market is broken and other things have to be done.

In fact, the interesting thing is that Nutaku has its own marketplace (on PC), he recommends us making F2P games. And also have their own fund that can help you finance the development of your games in this less competitive category. Specifically, only in 2018 did they finance the relevant figure of 32 videogame projects. 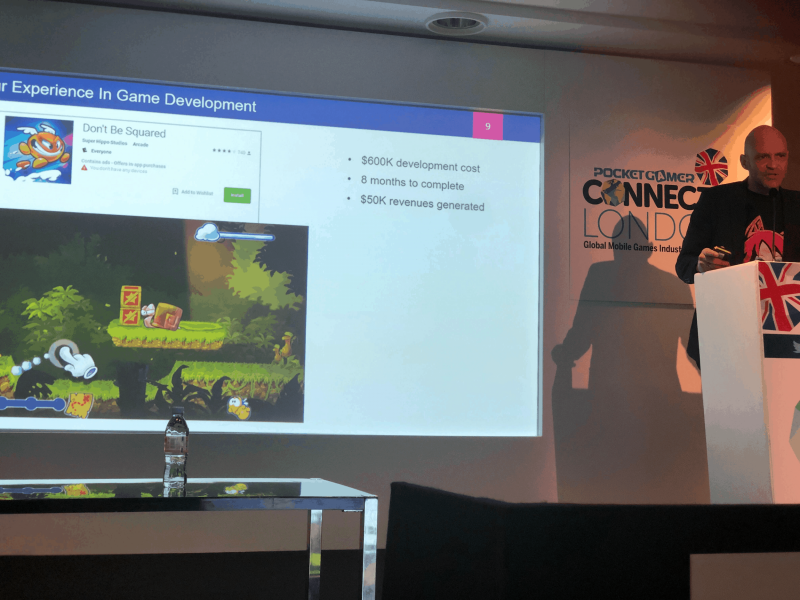 Jean-Francois Tremblay of Nutaku exposes different examples of games that they have made and have obtained a very low return, and in fact they have not reached the break event despite having important resources both economically and humanly.

I really liked Jean-Francois’s talk because he did not stop at words. He showed us very interesting numbers of tests they had done in the casual segment of the app store, where they invested millions of dollars and barely made any return.

Nor was shy when talking about the money generated by the games on their platform, and we saw that some of the top grossing generated between 2 and 4 million dollars per year. These numbers are far from the figures of the most successful games in the app store, but even so it is a very remarkable success.

Finally, he told us about the DAU of the most popular games in December, with figures between 25,000 and 80,000 active users per day for each of those top games.

Ioana Hreninciuc of Gameanalytics shared with us key information of her report on the state of the industry during 2018. Luckily you can download this document in the link and I think it is a mandatory reading.

She told us about the retention of the most successful games in D1, D7, D30 etc., so you can compare your game with others to know if you have good or not so good metrics.

In addition, this information is broken down according to the category of the game (casual, puzzle, action, etc.) and bases its information on hundreds of thousands of apps and billions of players, so it must have some credibility. 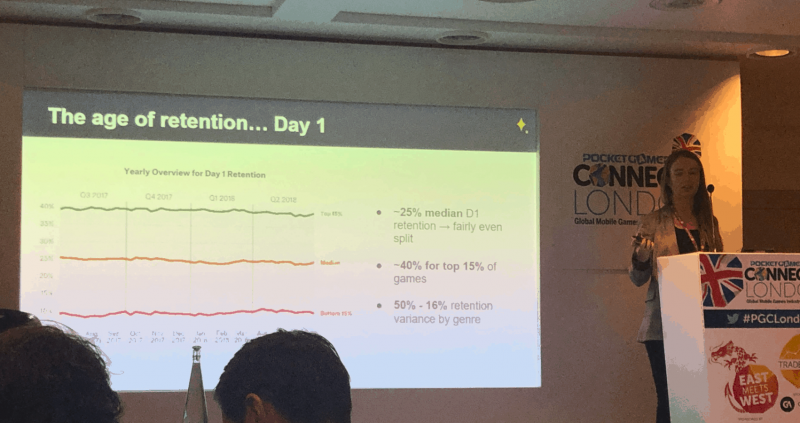 Natalie Suthons and Justin Nield from Vungle tell us about playable ads. This is, instead of showing the user a video of how beautiful your game is, show him a mini-game directly.

We all know that playing in principle has to be more fun than watching a video (and I say in principle that’s why Twitch and others…). But did you know that they have multiple cases in which the CTR doubles or increases to more than 200%? That’s really interesting… and it’s a very important technology to seriously consider in any user acquisition strategy. 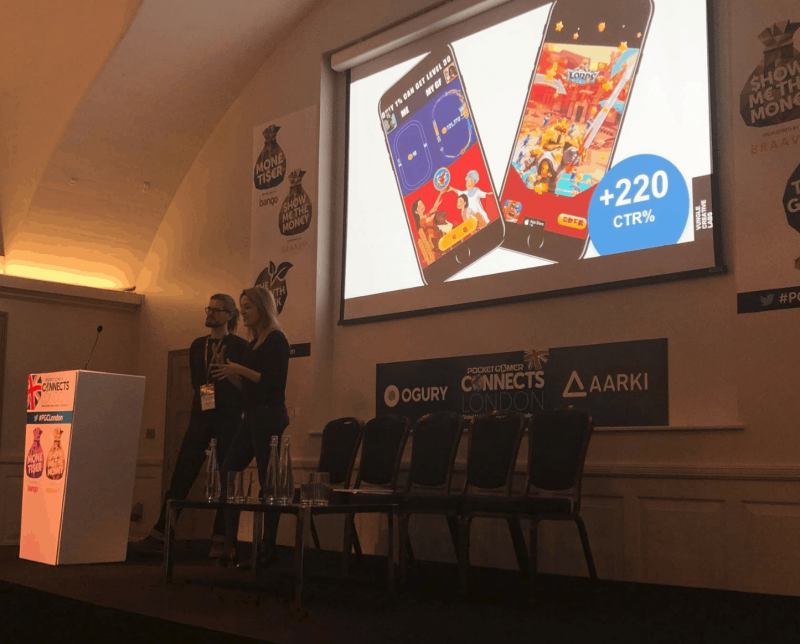 The truth is that I have always felt admiration for the people of Photon. How you can always find them in any B2C gaming event, and there was no shortage in London. They presented here QUANTUM, which is a kind of predictive engine to develop multiplayer games.

The novelty? They make life much easier for the programmer, since in theory it is much quicker and easier to develop multiplayer games in real time.

I think that this can be an interesting opportunity for the sector, facilitating the development of this type of games and reducing its cost in an important way. 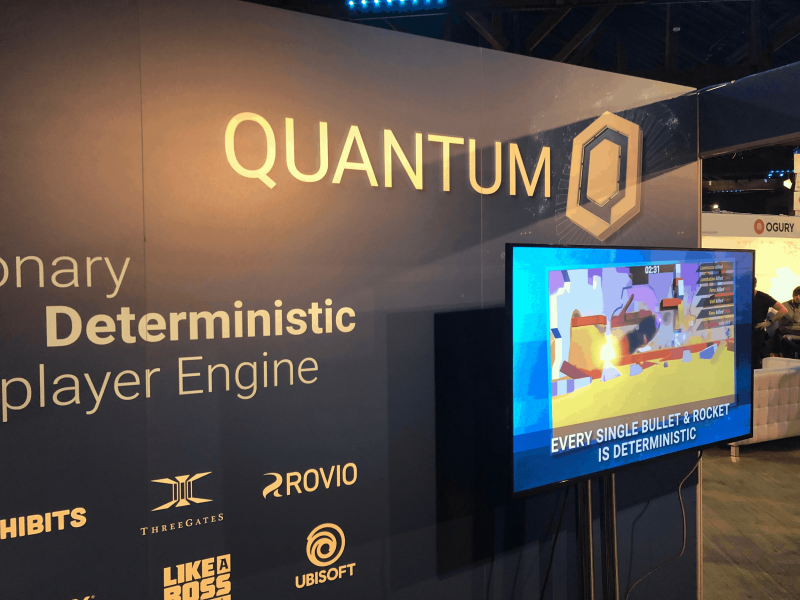 As a conclusion, Pocket Gamer is a good event to catch up. When you know the trends you can use your intuition to pursue opportunities. I hope this article has been useful, and that we can meet in London next year if you decide to attend the PGC.