Because almost all console vendors want to be sure each submitted game is stable on the platform in terms of its performance, the first step is to make sure that your game has no bugs and meets the technical requirements of the platform. For this to happen, it is necessary to have in your team of Nintendo Switch porting, qualified QA staff to check if the game works correctly, in accordance with the requirements of the platform. This way, you avoid spending your time and financial resources. Also, you will be prepared for the complex submission process in advance. If you do not have the necessary specialists for the QA team, you can collaborate with a game development outsourcing studio such as Starloop Studios, which will offer you game testing solutions for a high-quality Nintendo Switch porting.

To avoid problems in the Nintendo Switch porting process, always be sure to have the latest version of the SDK, when your game developers team starts working. Even if Nintendo Switch releases new SDK updates while your team is in the middle of the project, it is important to make sure you update the latest version of the SDK. If you work with Unity, this action will take longer, since it is proprietary software. But, if the game is created with Unreal Engine, you can more easily make changes from the old version to the new one, without too many bugs and errors. 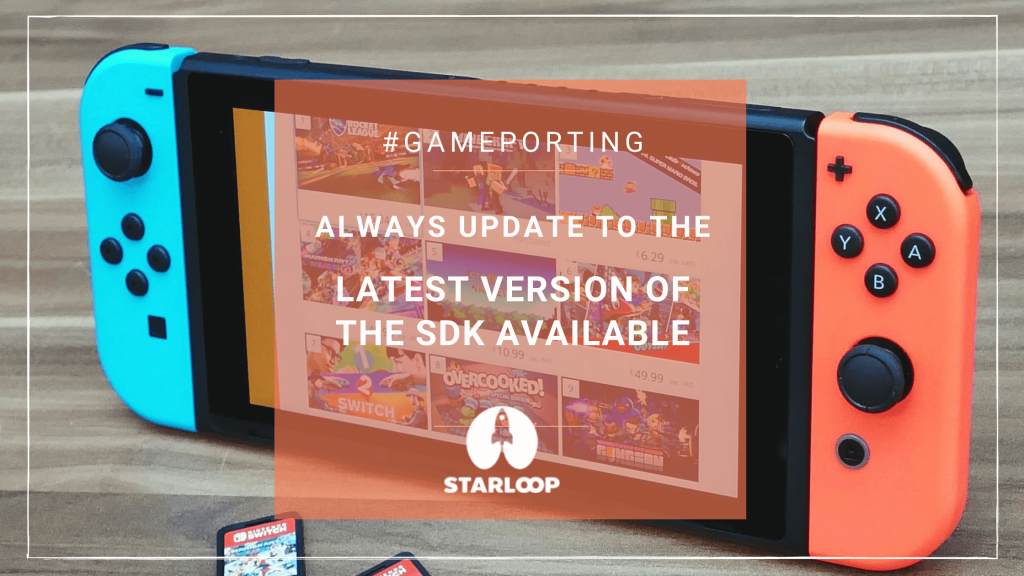 In order for the GPU optimization to be done properly and meticulously, you should know that you will have to invest a lot of time and effort in this aspect. The optimization of the game’s graphics must be at high standards, especially if the video game is built around vivid impressive art, like in the 3D diving adventure ABZU. For this job, it is necessary to have a team of technical artists who know their job very well and who will make the connection between the art and game developers. Technical artists are very valuable in big Nintendo Switch porting projects, where they can make a major difference in GPU optimization. If you choose to collaborate with a game development outsourcing studio, such as Starloop Studios, you no longer have to worry about creative expertise, because you will have a whole team of experts at your disposal.

Can memory limits be a problem?

Matching the specifications with the original platform

When a player knows the original version of a game, he has high expectations when he is going to try the game on a new platform, such as Nintendo Switch. So, you have to compare UX on Nintendo Switch with the version on the original platform and analyze if the game fits all the specifications. Porting games to consoles requires a lot of work if it’s not nearly as simple as it sounds.

Porting a video game to a platform as popular as the Nintendo Switch is a winning choice on both sides: players will receive something new, long-awaited, and you will enjoy a large audience that will love to play your ported game.

If you like to simplify things but to maximize the results, collaborating with a game development outsourcing studio could be the ideal solution for your project. Outsourcing game porting  gives you immediate access to our top-level Starloopians who don’t need additional training. The team has the expertise to do the job quickly and efficiently. In addition, game outsource brings you cost savings and performance without any hassles. While we expand your game vision to many platforms, you will be able to better focus on your core business.

If you want a team of professionals who handle all the issues of cross-platform porting, feel free to contact us.