How to Create a Well-Balanced Game Economy Design?

Besides all the aspects that make a video game a very good one, it must have a perfect game economy design. What exactly does this term refer to and what is the role of a game economy designer? For the video game to have an optimal monetization system, it is necessary to balance all numerical indicators in the game. This process involves an exact strategy that establishes the player’s reward structure, how to maintain his interest in the game, and how to urge him to spend his virtual or real money.

The responsibility of a game economy designer is to see the big picture and to correlate the economic connections of the game with real-life using various scientific methodologies.

In order to design a balanced game economy, you should take into account 3 main objectives. The first is the pace at which players advance in the game, the second is the characteristics of the game and how they are represented, and the third main goal is how players can buy currency.

Why do you need a well-balanced game economy design?

You can have a perfect game economy, but if the game is boring, players will not play the game and will not buy items. Or you can have a video game with an attractive design and advanced animation, but if the player doesn’t need to buy anything, complete the levels effortlessly, and progress quickly, all this is in vain. Or, on the other hand, if the game is too difficult, without reward systems, the player will get frustrated and give up the game.

Therefore, it is necessary to have a well-balanced game economy design. The main objective of the game must be defined, but also the secondary objectives, such as after how many days of play the user can complete level 15 of the game. Then, all the objectives must be justified by the game economy. Specifically, if it has been established that the player completes level 15 after 4 days of play, he must receive enough currency and items to make this possible.

How to create a well-balanced game economy design

1. Establish the main indicators of the game

The main resource for all of us is time. All other values ​​in the game are compared and calculated based on time because the goal is to motivate players to spend as much time as possible playing the game.

2. Determine which are investment and non-investment resources

The speed with which a player receives the main value of the game is impacted by investment resources. The investment resources are those that affect the player’s development. To maintain a balance in the game, they must be limited. For example, the player can receive a boost to help him finish the level faster, but it must be calculated. If the game becomes too easy, the player may lose interest in the game. 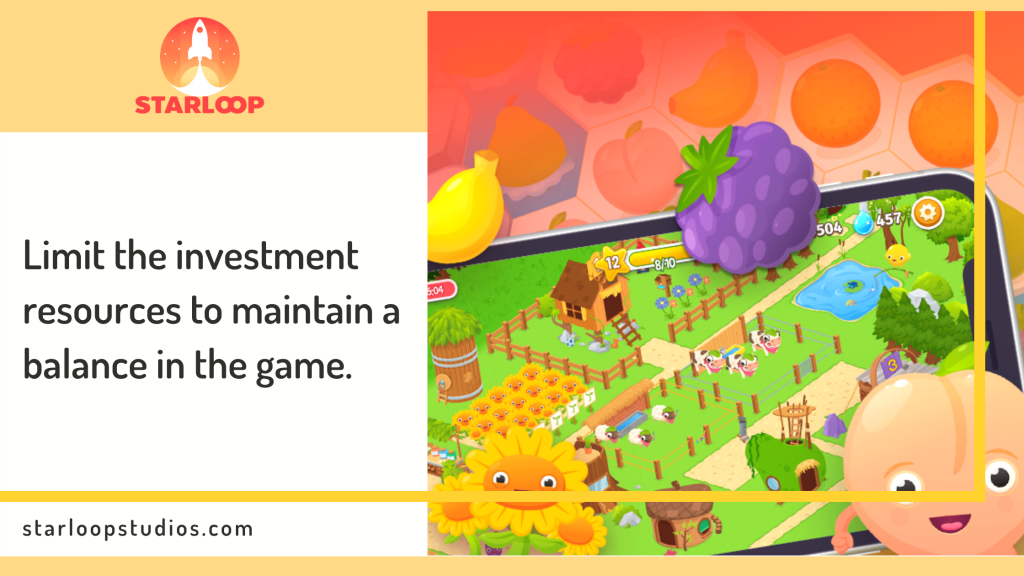 On the other hand, non-investment resources do not influence the player’s advancement in the game. For example, character clothing visually delights players but does not influence player development.

To well-balanced game economy design, it needs a system to set fair prices and determine how much everything is worth in the game. When a player moves to the next level, he wins in-game currency or certain content types that they pay for. In the function of time, he can use this in-game currency. For example, a player receives 100 gold coins when completing a mission. But how often will he receive these 100 gold coins? What can he buy with these and when? The game economy designer adjusts the system of costs in the game to create a balance between income and expenses.

4. Deficit and surplus for a more interesting game

The player’s pleasant experience comes from the balance between difficult and easy, interesting and boring. As in the real economy, the player can sometimes have a deficit or a surplus. When the surplus increases, so the price of items, as the price of food, while the number of rewards decreases. All these deficits and surpluses create emotions for the player and make the game more interesting. For example, if a level is too difficult to pass and the player is frustrated, he can pay a boost to pass the level faster. But a balance must be maintained, because too much frustration or a game too easy can make the player leave the game.

The game economy designer will know how to make the right decisions and what needs to be changed for a well-balanced game economy design (for example, he may understand from data that the game offers coins too frequently and the player’s interest may decrease).

Designing a game economy can be a complex task if you do not have enough experience in the field or a sufficiently prepared team. Therefore, outsourcing this task can be a great idea. With over 10 years of experience in the field of video games, Starloop Studios can offer you solution for a well-balanced game economy design to keep your players engaging and paying. From creating flexible economy systems and data structure, balancing virtual products to recommendations on sales, our Starloopian team can help you.

For free consultation, contact us  and we’ll offer you the expertise to analyze the in-game data of your player’s journey and build a fun and sustainable economy system.