Game Level Design: How to Do It and With What Tools

We all play video games to relax, escape from the real world to a more fun world, or to show our skills in competitions with other players. Before designing any video game, the whole development team must keep in mind that, regardless of the objective of the video game, it must be engaged and retain the player’s attention as much as possible.

Some video games are better than others because they make people believe in the world that game designers have created behind. They are so captivating that the players immerse themselves in the fantasy world and no longer consider the time spent in the gameplay.

What is game level design on video games?

Game level design is a part of the game development process that involves creating the stages of the game, game mechanics, missions, obstacles, and everything that makes good gameplay. Game-level designers produce the actions in the game, the events, the objects, and the environment – more precisely, what we call “level.” All these aim to create a positive user experience and keep players engaged.

Game level design is about creating a world in which players can escape, a world which arouses curiosity and the desire to explore it. No one wants to escape into a dull world, so game-level designers should avoid repetitive and easy tasks for players but creating interesting ones that they can perform with excitement.

At first glance, it can be easily confused between game design and game level design, but there are two different things. Game design refers to the mechanics and rules of the game, in a word: “gameplay.” Alternately, Level Design is about the environment in which the game takes place and the challenges that test player capabilities to accomplish missions.

What are the stages of level game design?

Ideas come from all sides, but before you choose the best ones, you need to know the limitations of the project. If the team is numerous, the constraints will come mainly from other members, especially from decision-makers such as the creative director or the art director. These general limitations that a game level designer may encounter can be:

In this phase, the team comes up with ideas and creates a primary thread of the story. To make their work easier, some level designers divide their work into pieces that are easy to manage. At first, they think of the level in different “zones” within the level and design them separately for a faster design.

Before investing time and money in the project, it is appropriate to have an overview of the level. Here is a helpful Bubble Diagram that supports level designers visualize the entire level and show them how to connect the areas. A Bubble Diagram is a very simple map of the whole level – circles representing areas in the level and arrows the flow and connections between areas. They help you visualize where each area is related to the others and the proper structure for the game’s objectives.

Once the level designer knows how to connect the areas thanks to the Bubble Diagram, the next phase of level game design is to create a rough design for each bubble. Depending on the choice of the level designers, some of them create it on paper, others on Illustrator, others in-engine.

At this stage, many details change, so distances and heights are not yet established. Also, level designers are now planning how to connect all previously designed areas. It is recommended that the intensity of the levels increases gradually, area by area and that the types of enemies be combined effectively.

The conclusion of the level design consists of connecting all the previously created areas in a physical space. At this stage, all the details are set, including the heights and distances. 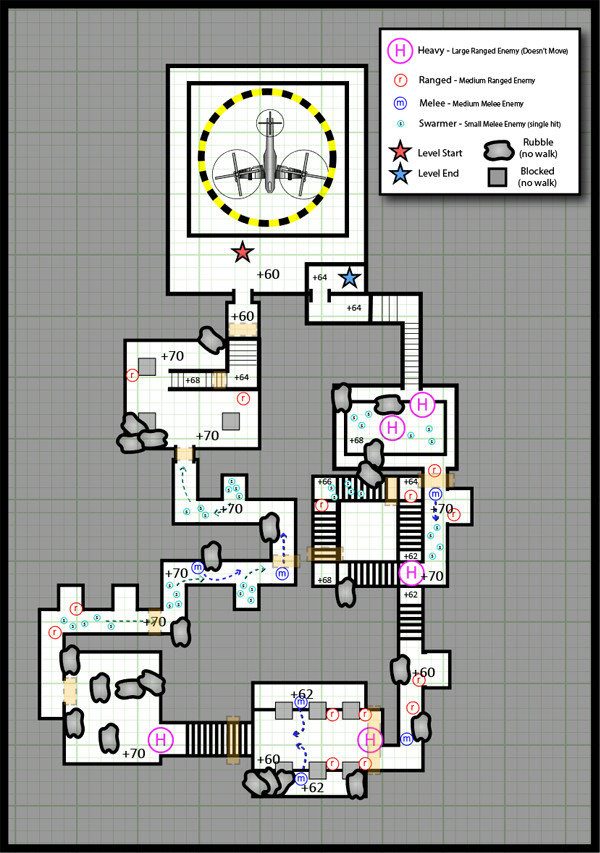 What must be taken into account to make a good level game design?

For a game experience constantly enjoyable, game levels don’t have to be boring. Players must be challenged correctly to complete missions in the game – peaks and falls in difficulty must be avoided. The difficulty level has to gradually increase, not too suddenly, to make gamers give up and not too slow for the game to become boring.

Before embarking on the road, game-level designers must consider the platform on which the video game creates. For example, people who play mobile games tend to invest less time to finish a game level than those who play video games on PC or console — also, children like more colorful, brighter images, unlike adults who prefer more accentuated shading and harder edges. If game-level designers take such information into account in their planning, they will create video games more to their audience’s desire.

To make the story and characters more interesting, game-level designers can use tools such as introducing a weapon, a new character ability, or a stronger enemy. If they add these tools efficiently, the players will be challenged without overwhelming while satisfying the games’ story element.

What tools are useful to carry out level game design?

Thanks to the software and tools they use, game-level designers can change new missions or new content without editing any code in the game engine.

Among the most well-known and used tools to create and edit levels in video games are 3D Studio Max, Photoshop, Blender, AutoCAD, Lightwave, Maya, Softimage XSI, Unity, Unreal Engine, or Grome – usually customized with a special plugin developed for the specific game.

Depending on the game they create, the level designers can choose between prefab a bunch of assets and use them in Unity or design and model an entire level inside 3ds MAX. Choosing to work with Unity makes everything easier if many tests have to be done – because it is no longer necessary for the level designer to constantly switch between 2 programs and re-export the level after each change.

For an immersive gameplay experience, at Starloop Studios, we create environments that are dynamic, immersive, and suitable for many types of playstyles that integrate both functional and aesthetic level design, level pacing and flow, player goals, and fun factor.

Contact us and schedule a free consultation with one of our Starloopians.